Together with SPECTARIS, BAH, BPI, GHE and ZVEI, the GHP (now: GHA) invited key stakeholders to the Foreign Trade Day 2019 for Medical Technology, Pharmaceuticals and Laboratory Technology at the Federal Foreign Office on 20 March.The focus of the conference was on recipes for success for German companies in the healthcare industry with regards to the challenges of free trade and digitalisation. This is an important topic for GHP, because numerous GHP members work in the export-oriented medical technology, pharmaceutical and laboratory technology sectors. GHP, as a partner and mediator, wants to deal with these challenges with its members. By participating in the Foreign Trade Day, GHP members were given the opportunity to discuss solutions for these challenges together with other stakeholders from politics and business.
Digitalisation. During the panel discussions, it became very clear that digitalisation plays a central role in the international competitiveness of German health companies. Innovative digital business models are needed. However, they often fail in Germany due to an inadequate IT infrastructure and legal issues. With the help of industry, politicians must create the right conditions to make the German health economy fit for the digital age. In China and the USA, companies in the healthcare industry have already begun to adapt more comprehensively to the digital age. With their innovative solutions, they are competing with German companies. Action must be taken immediately, in order to guarantee the competitiveness of the German health economy in the future as well. On this topic, the GHP organised the panel discussion “Digital International – What role do digital business models play in internationalisation”. The panelists concluded that the potential of digitalisation in the healthcare sector can only be utilized if the necessary IT infrastructure is created in Germany. In addition, nationally binding and internationally recognized and used standards for data and IT infrastructure need to be introduced. 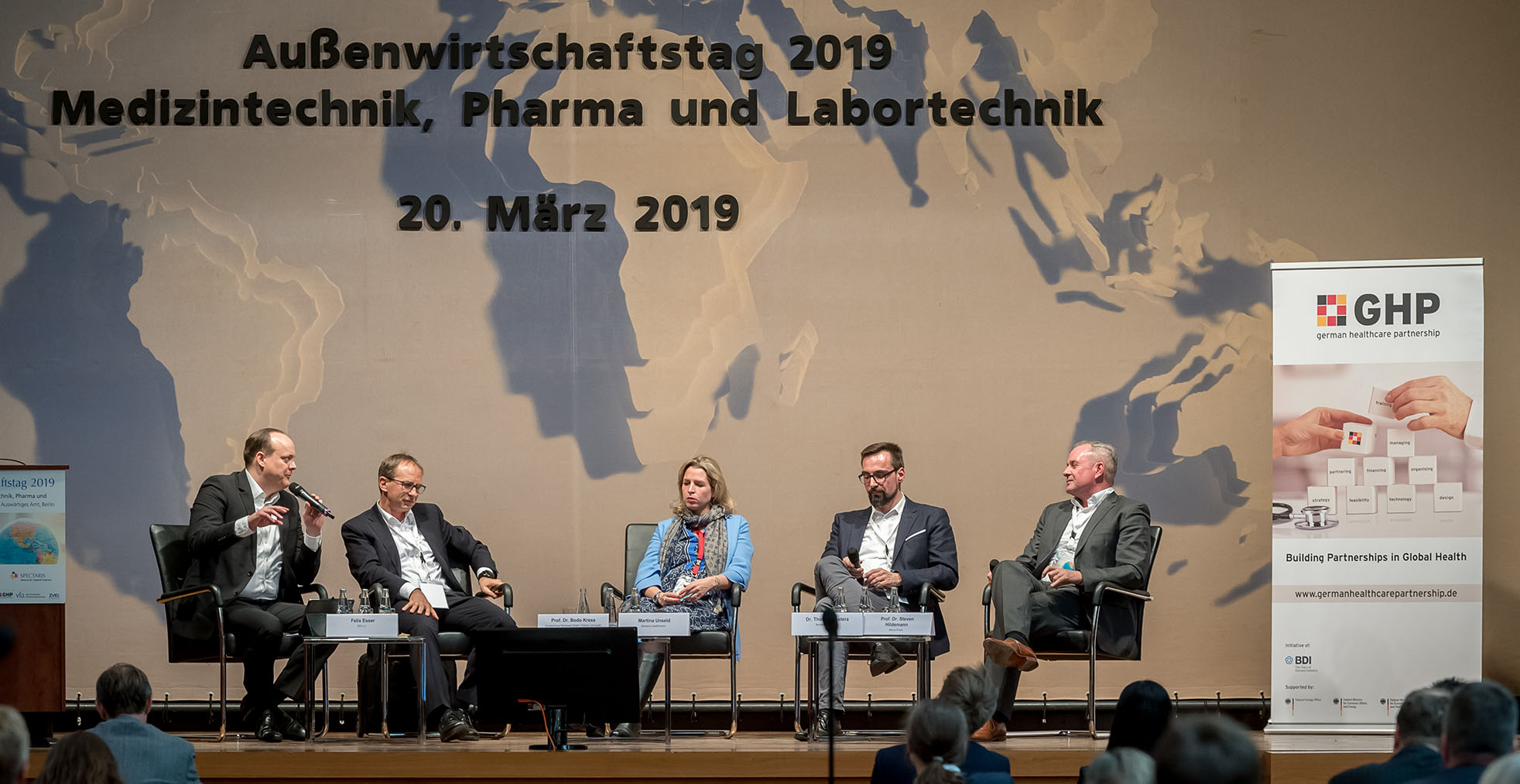 Free trade. Many companies expressed concerns about increasing protectionism around the world. Trade barriers and tariffs pose growing problems and planning difficulties for export-oriented German companies. The main concerns mentioned were the protectionist US trade policy, US sanctions and the looming Brexit. It was demanded that existing foreign trade instruments should be employed more intensively in the health sector in order to facilitate market access and improved access to high-quality healthcare. In addition, it became clear that stronger political support for the activities of the German health economy is necessary in order to build partnerships abroad and fight protectionism. Here, health should play an important role in both multilateral and bilateral cooperation. Accordingly, the GHP will continue to work at the political level to strengthen free trade and cooperation based on partnerships. On this topic, the GHP panel “Business Models in Africa” highlighted the enormous potential of African countries, which are expected to require around €35 billion in health investment over the next seven years. The panelists talked about successful business models and challenges regarding political support of projects, local infrastructure and capacities.
Regulation. Market access for healthcare companies is strongly influenced by regulatory frameworks. Accordingly, the companies have clearly spoken out in favour of further intensifying the dialogue to harmonise regulatory and technical standards. The European approval regulations for pharmaceuticals and medical technology were highlighted. They must be permanent and recognized without restriction in order to ensure smooth trade among the European partners.Europe. In his speech, Niels Annen, Minister of State at the Federal Foreign Office, stressed the importance of a multilateral and rule-based approach to the global challenges that medical, pharmaceutical and laboratory technology companies are facing. According to Annen, this will only be possible through a united Europe. Only together with Germany’s partners within and outside the European Union, it will be possible to secure and expand the success of the export-oriented German health economy. This conviction was also shared by all the companies present and was thus also echoed in the panel discussions.