GHA’s efforts in the field of health crises, humanitarian crises and related health system strengthening have yielded tangible success on the national and international level following the lessons learned from the Ebola Crisis. GHA’s multi-sector approach is regarded as a currently unique, proactive push of the private healthcare sector towards significant improvements in communication, cooperation and coordination in multi-sectoral groups and single stakeholder groups. This increased understanding and openness between sectors, causing them to collaborate more closely and to envision innovative partnerships. The establishment and clear definition of the role of the private sector in the area of health and humanitarian crises is one of the GHA’s focus areas, highlighting the utmost importance of public-private collaboration. 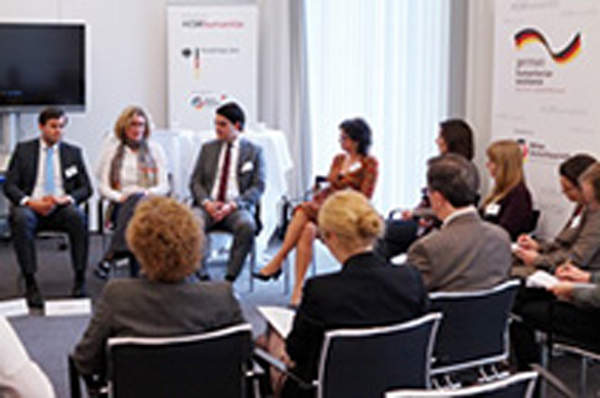 Diana Peters, GHP Coordinator for Health Crises and Health System Resilience, was invited to moderate the Health Workshop at the 2nd #CSRhumanitär event in Berlin. In addition, a fruitful collaboration between the initiative and GHP has been developed. Read more about the results here…

The 2014 Ebola virus outbreak has demonstrated in a tragic way the failure of existing international mechanisms in managing health crises  The UN Secretary General’s High Level Panel on the Global Response to Health Crises focuses on the strengthening of health systems, as they lay the foundation for the early detection and effective containment of epidemics, and for meeting communities’ essential and ongoing health needs. The German government supports this new international effort with “The Roadmap: Healthy Systems – Healthy Lives” and a special programme on “Health in Africa”. In order to support the joint efforts, the newly established GHP platform “From Ebola towards Strengthening Health System Resilience” embeds its work in the international public health approach and the Sustainable Development Goal 3 on health to strengthen health system resilience, implementing the lessons learned from Ebola with the following focus areas:

GHP has employed a new team member, Diana Peters. Starting with the example of the Ebola epidemic, Diana Peters will deal with patterns of epidemics, structures of humanitarian help, and needs of severely affected health systems. Ms Peters will be in charge of all related issues. The aim is to improve preparedness of health systems, understand and limit the drivers of epidemic outbreaks, and apply knowledge of how to strengthen weak health systems before and after epidemic crises. The initial steps of the work include mapping, gathering, bundling and synchronising all activities, solutions and contributions of German players within the international response.

16th February 2015, 2nd Meeting of the Action Group against Ebola

On February 16th 2015, six months after the peak of the heavy crisis, the “Action Group on Ebola” met again for exchanging knowledge and ideas on the current situation and on steps to be taken in order to re-establish healthcare provision in the most affected countries and prevent new outbreaks of the epidemic. GHP now further fostered and extended the Ebola work by implementation of the “Coordination Office Epidemics” within the GHP team, financed by the Federal Ministry for Economic Cooperation and Development.  As the African Ambassadors of the three most affected countries reported, cases have reduced drastically and countries are starting to go back to normal, the general tenor was positive. However, as cases are still fluctuating a lot and the population has not only been hit in terms of health, but also psychologically and socially as well as economically, the systems are still very fragile. There is no need to re-establish the treatment centres and expand the infrastructure further at this moment. Instead, the focus should be on the empowerment and capacity building of healthcare workers.

10th December 2014, Workshop “Together against Ebola” of the African Ambassadors, Egyptian Embassy Berlin

On December 10th 2014, the Workshop “Together against Ebola”, hosted by the African Ambassadors, was held at the Egyptian Embassy in Berlin. After the welcome note by the host, H.E. Ambassador Mohamed Abdelhamid Ibrahim Higazy, the opening by the Dean of the African Ambassador H.E. Jean-Claude Bouyobart and a keynote of the Ebola Special Representative of the Federal Government, H.E. Ambassador Walter Lindner, who reported on the current situation on the ground, discussions on ongoing activities, challenges and necessary next steps in the fight against the Ebola epidemic took place. In the panel “Perceptions, Social Implications and Corporate Responsibility”, Roland Göhde, GHP Chairman of the Board introduced the GHP, the “Action group against Ebola” and the systemic approach of the GHA to sustainably strengthen healthcare systems. At the closing of the event, a representative of the African Ambassadors read out the common final declaration of the African ambassadors, the German-African Business Association and the GHP, determining that future efforts and activities and appropriate follow-up events shall be carried out in cooperation.

At the invitation of the World Health Summit and the Federal Foreign Office, Roland Göhde, GHP Chairman of the Board, participated at the Special Plenary Session on Ebola. The Federal Foreign Office declared that Ambassador Walter J. Lindner has been announced special envoy for the coordination against Ebola and presented an action plan consisting of three steps: 1) stop the transmission, 2) rebuild medical services and 3) prevent a new outbreak. All participants declared their possible ways to contribute, i.e. medical device, laboratory equipment, expertise or financial support. At the same time, regulatory issues being barriers to short-term aid were discussed.

30th September 2014, 1st Meeting of the Action Group against Ebola

At the peak of the Ebola epidemic in late summer 2014, the German Healthcare Partnership (GHP) has launched an action plan against Ebola on request of the Federal Foreign Office. In this context the “Action Group against Ebola” was jointly established by GHP and Afrika-Verein: At the 1st meeting, more than 30 players of the German healthcare sector met and discussed with ambassadors of the affected countries how to fight this deadly disease. A single point of contact was installed, where demand and supply could be matched and donations where tracked. The Ambassadors of Sierra-Leone, Liberia and Guinea made an urgent appeal to support the fight against Ebola with the biggest challenges being infrastructure and equipment, logistics and capacity of healthcare workers.

Cooperation in Health Crises
The GHA works with private companies, NGOs, government agencies and other national and international actors to coordinate responses to international healthcare incidents such as the Ebola crisis. GHA enables more efficient and targeted donations of medical goods and services from Germany.

Healthcare in Humanitarian Crises
Although pandemic preparedness and response is an important theme, the healthcare sector also plays a large role in responding to healthcare related aspects of other humanitarian crises, such as the cholera outbreak after the 2010 earthquake in Haiti. GHA’s information sharing platform communicates lessons learned and best practices in this area.

Health System Strengthening
It is critical to build resilient health systems that can withstand unpredictable emergencies of unknown proportions. The GHA represents German companies across the healthcare value chain that collaborate in innovative partnerships in target countries to improve upon and build new health infrastructure.

Networking Sessions
We regularly host networking sessions between our member firms, the German Government, and NGOs.

Participation in Conferences
We have presented at or participated in over 11 conferences in the last two years, including speaking at the G20 Expert Conference “Taking Action against Health Crises” (7/8 December 2016) and participation as one of only two private actors at the World Humanitarian Summit in 2016

Agenda-Setting
We work to influence the international political agenda, such as successfully advocating that the G20 Topic “Health Crises” would also be an important theme at the B20 Health Conference (18 May 2017).

Public Private Partnership Support
We support the creation of new public-private partnerships. For example, we led the development of a strategic alliance between GHA member firms working in medical technology and the BMZ in the context of the develoPPP program.

Outreach to NGOs and Faith-Based Organisations